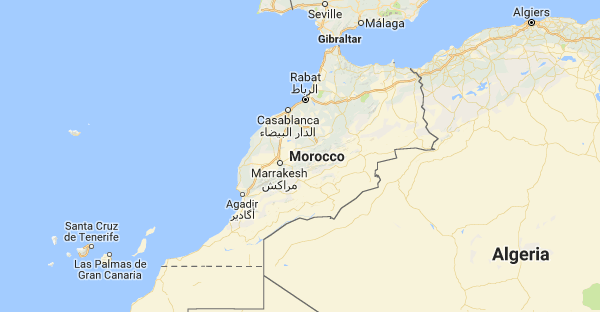 This gateway to Africa, on the edge of the Mediterranean, is hectic, friendly and enthralling – if variety is the spice of life, then Morocco is the signature dish.
If you thought Morocco was all mosques and magic carpets, venture further afield and be delighted as your horizons expand.
Casablanca, Rabat, Tangier and Marrakech – even the most geographically challenged are stirred by the exotic and romantic images conjured by Morocco’s Imperial Cities. Immortalised by myths and movies, the country is tantalising, rich and mystical.

History here is still very much alive and waiting for you to immerse yourself. The Moroccan people are friendly, warm and hospitable and proud to treat you as their own guests wherever you tour in their homeland. You’ll notice touches of Spanish and European influences. Morocco has seen a number of countries, notably Spain, France and Germany, try to claim it for their own, leaving remnants of their footprints along the way.
The Kingdom of Morocco – known to the Arabs as al-Maghreb al-Aqsa, or “the farthest west”, is characterised by its magnificent Imperial Cities, palaces, mosques, gardens and colourful markets. Moroccan leather is said to be the softest in the world – keep an eye out!
For a more outdoorsy trip, Morocco also boasts beautiful gardens, white sandy beaches and 300 days of guaranteed sunshine in which to enjoy them. Morocco’s climate makes travel a pleasure at almost any time of year.

Morocco Grand Tour 11 days, 10 nights
This private tour offers the chance to combine the historical imperial cities of Fez, Rabat, Meknes and Marrakech with the often breath-taking scenery of Morocco’s diverse landscapes, from the rolling hills and cedar woods of the Middle Atlas mountains to the vast sandy wastelands of the Sahara desert.

This tour can be with a private car & English speaking driver or by self-drive in a rental car. The itinerary can be modified or extended.
…

Saturday  Casablanca.
On arrival at Mohamed V airport in Casablanca your driver will be waiting with a sign bearing your name. Transfer into your central Casablanca Hotel.

Sunday  Casablanca to Rabat (B)
After breakfast, you will view Casablanca with an orientation tour of the business capital of the kingdom. View the Hassan II great mosque (outside only) before strolling along the Aïn Diab corniche. Free time for lunch before the departure to Rabat. Visit of the administrative capital of Morocco.

Monday  Rabat – Volubilis – Meknes – Fez (B,D)
Depart for Fez with a stop at the Roman ruins of Volubilis. Free time for lunch before continuing to Meknes. Founded at the end of the 17th century by Moulay Ismail and protected by its magnificent monumental gates Bab el Khemis and Bab Mansour. Continue to Fez.

Tuesday  Fez (B,D)
The whole day is devoted to the city-sightseeing of Fez. The religious capital of Morocco includes medieval Medina with its Attarine and Bou Anania Medersas; the Nejjarine fountain, Moulay Idriss mausoleum, and Karaouine mosque. In the afternoon visit Fez Jdid.

Wednesday  Fez to Midelt and Erfoud (B,D)
An early departure to Midelt via Azrou, a Berber village known for its handicraft cooperative. Free Drive through Midelt, Ziz river and a series of fortified villages.
Optional: Excursion by 4X4 vehicle to the Merzouga dunes.

Thursday  Erfoud to Tineghir and Ouarzazate (B,D)
Drive to Tineghir via Rissani. Visit of the ruins of Ksar Abbar and through the Tinjdad road to the Todra Gorges, a 300m deep cut in the mountains of the High Atlas. Drive on to Ouarzazate via El Kelâa M’gouna and the Dades valley.

Friday Ouarzazate to Ait Ben Haddou and Marrakech (B)
After breakfast, visit of Ouarzazate with Tifoultout and Taourirt Kasbahs, then departure to Aït Ben Haddou village. Free lunch and visit of the ruins of this ancient Kasbah which is the best preserved Kasbah in Morocco and under Unesco protection. Continuation via the Tiz-In-Tichka pass (altitude 2260m) and Taddert to Marrakesh.

Saturday  Marrakech (B,D)
In the morning, visit the Koutoubia Mosque (exterior) and its 77m high minaret, the most famous religious monument of Marrakech. Visit the Bahia Palace – the decor evokes sensuality, elegance and enchantment. It has 150 rooms, all on one level, then, Saadian tombs and the Menara olive trees around the ramparts.
This afternoon explore the medina and souks, Djemaa El Fna.
The Fantasia dinner this evening will feature folklore and traditional sports.

Sunday  Marrakech to Essaouira (B)
Departure for Essaouira (once known as Mogador) via Chichaoua. This afternoon visit of the town and typical Portuguese Harbour with fine example of both Moorish and Portuguese art.

Monday  Essaouira to El Jadida and Casablanca (B)
The drive to Casablanca will have a stop at El Oualidia and free time for lunch free before driving along the Atlantic coast to for an orientation tour of El Jadida before arriving in Casablanca. 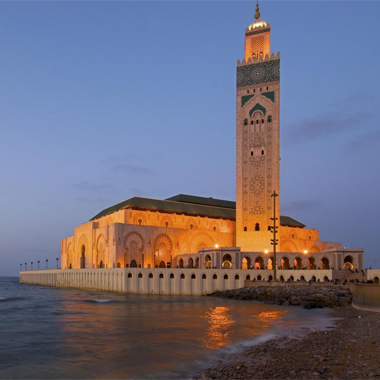 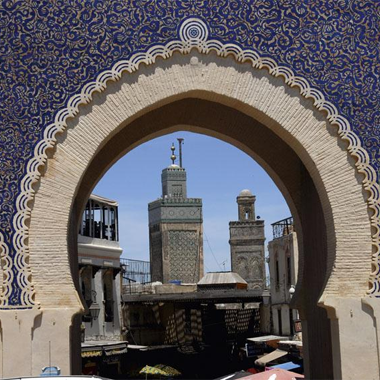 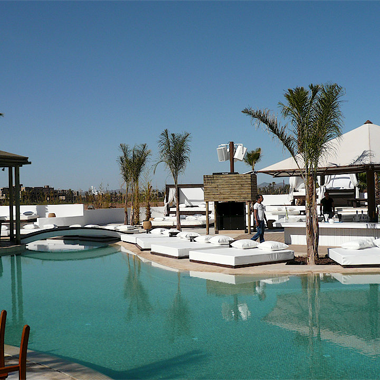 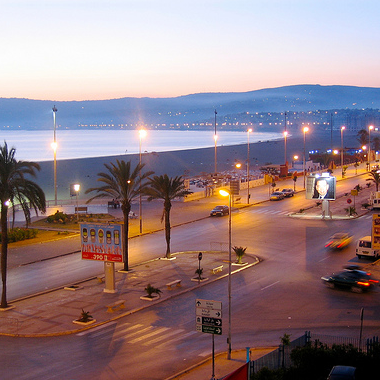 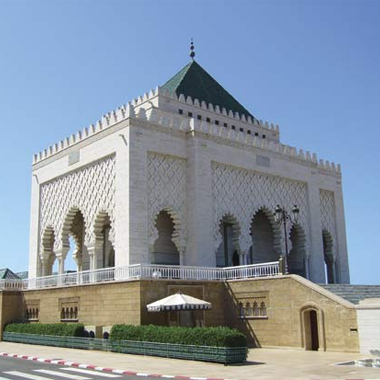 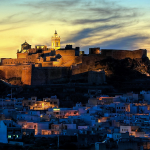 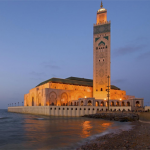