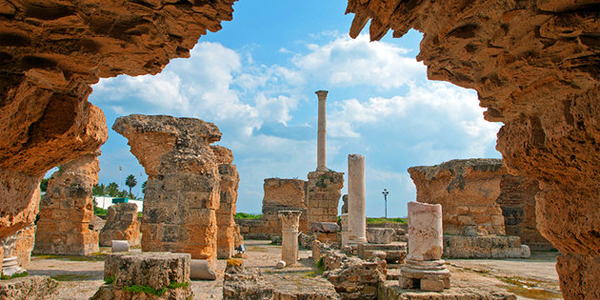 A little bit of history…
Over the centuries, Tunisia has known several waves of settlement absorbing influences from the Berber, Punic, Phoenician, Roman, Byzantine, Arab, Spanish, Turkish, French and now modern tourism from all over the world. With a tradition of accepting refugees, the country was in particular been a refuge for the first Jewish diaspora, when the temple of Jerusalem was destroyed in the 6th century BC. Around 814 BC, the queen Elyssa, founded Carthage and gave birth to an empire which would shine for about seven centuries. Rome, irritated by the prosperity of its Carthaginian neighbour, initiated the first Punic war (260 BC). But it was not until the third war that Rome finally neutralized the Carthaginian resistance.

Following the Turkish conquest (1574), Tunisia part of the Ottoman Empire until the occupation of Tunisia by France, and the proclamation of the French protectorate, in 1881. It was not until 1954 that France recognized the autonomy of Tunisia. Tunisia obtained independence on 20th March 1956, proclaiming Habib Bourguiba the first president of the Tunisian Republic in 1957.
Zine El Abidine Ben Ali was elected President in 1989, escaping to self exile in Saudi Arabia during the “popular unrest” in January 2011.

Where to go and what to see…

Archaeological sites & Museums:
At Carthage, there are Punic ruins at Antonio’s baths, Roman villas at the theatre and archaeological museum. The Park extends from the hill to the shore, offering visitors a green path. You can also admire the Roman temple of Dugga, the Punic Necropolis of Utic, the Roman temple of Sbeitla, the underground Roman villas of Bulla Regia, the Coliseum of El Jem or the archaeological museum of Sousse. A hop from Tunis, the Bardo museum, where Tunisian history is demonstrated through numerous artifacts or artworks, host the largest Roman mosaic collection in the world.
The Chemtou museum offers a magnificent collection of yellow marble, a Punic department with a modern room with audiovisual equipment. The Mahdia museum presents, besides Punic vestiges, the history of the Fatimide capital. It is also an opportunity to discover the traditional dress of the region.

Architecture:
Arab Muslim art is expressed through sumptuous buildings. Amongst monuments, you can visit the Great Mosque of Kairouan, one of the greatest cities in the Muslim world, the Great Mosque of Ezzitouna as well as the Medina of Tunis which presents a typical configuration.
On the way to the Great South, you will see many constructions called « Ksars », kind of quadrangles formed by a set of superposed alveoli. In Matmata, discover the famous “troglodyte” dwellings, which are hobbit-like underground homes or homes carved in the valleys.

Flora & Fauna:
Varied Flora comprising of cork-oaks, eucalyptus and thuyas (fragrant wood largely used in Morocco to create artifacts) in the North. In the Sahel region, olive trees and orange trees. In the South, you will find palm tree groves as well as some cactus, thistle and thorn trees. And everywhere, North to South, the prickly pear tree. If the countryside is not really concerned with environmental issues, the surroundings of large cities, such as Tunis or Sfax, are highly concerned by pollution. The olive tree, king of the Mediterranean, is obviously very present in Tunisia. We also find a lot of cork-oaks. Orange trees, lemon trees, mandarin trees, carob trees, pomegranate trees and oleanders make up the panorama of the country which also produces numerous aromatic herbs. A visit to the oases is a must to admire numerous fruits and vegetables: tomatoes, squash, figs, apricots, peppers, onions. Finally, what strikes in Tunisia are the omnipresent flowers (jasmine, roses, mimosas, bougainvilleas, lilies).
Natural parks are rich with animals: you can discover otters, gazelles, snakes, hyenas, lynx, porcupines, boars, mongooses (mongeese?), foxes, jackals, turtles, different species of prey birds, migratory birds, and even buffalos. The Tunisian Society for the Protection of Animals has set up a programme for the protection and breeding of endangered species. Unfortunately, wildcats (lions, panthers, leopards…) disappeared over a century ago. The village of El-Haouaria, capital of falconry, close to the cap Bon, is where falcons and sparrow hawks are caught and trained for hunting. In the South of the country, desert animals can be observed. Finally, the Gulf of Gabes is a real sanctuary for birds.

The Sahara:
Readily accessible, the great Tunisian south offers sandy panoramas and numerous oases. In Matmata, there is an unusual landscape of craters. Georges Lucas shot much of “Star Wars” here, as did Anthony Minghella with the movie “The English Patient”.

The beaches:
Tunisia has 130kms of beautiful sandy beaches. Developed with French style family resorts, you can swim from early April until October, or even November. Many activities are offered: pedal-boats, parakites, sea fishing, windsurfing, water skiing. And, of course, beach football or volleyball games that you can easily join. Surprisingly, the beaches and resort’s sun bathing areas are “clothing optional” although this aspect may change as a result of the “Islamisation” that could occur in the aftermath of the January 2011 popular uprising. 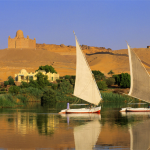